Skip to content Main Menu
All For Pets > Pet Tales~ > All for Dogs > All for Puppies > Puppy Feeding, Keep it Simple! 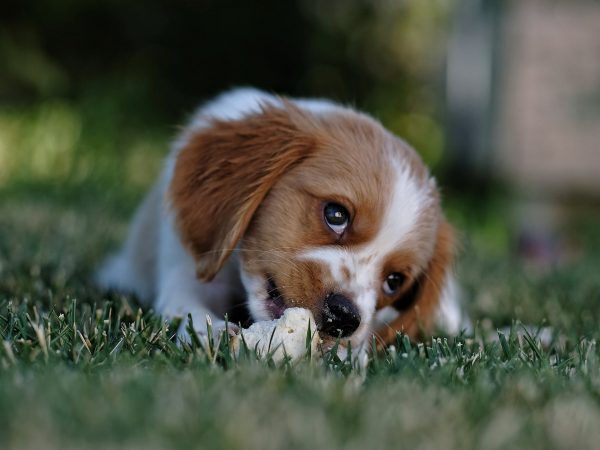 For the first few weeks keep everything you can as close to the same as where your puppy came from. Especially, don’t change food. I know this is backwards from what most retail pet feed stores will tell you, but All For Pets is in it to help you succeed and part of that is alerting you to this reality. Make sure you get enough of the food the puppy has been on to feed for at least two weeks.

You and your fur baby are just getting to know each other. You want and need to be able to spot signs of illness. A change in food can complicate this process by mimicking symptoms that can also be indicators of serious illness that puppies are prone too. Give yourselves time to know each other’s clocks so that feeding and bathroom breaks become predictable enough that you will be able to see differences that might be indications of other issues.

Create a feeding schedule. Feed your puppy at the same time everyday as much as possible, and use feeding as a training opportunity. The best puppy feeding schedule is in the morning right after puppy has gone outside to eliminate and then about 8 to 10 hours later and 1 1/2 before bedtime repeat the same process. As your pup comes to predict the feeding schedule, they cooperate with any consistent training games associated with feeding.

For example ask them to sit while you serve the food. Also try to get them to wait until you have their attention so that they can start to learn to eat only when you say they can eat. This helps to establish commands such as, “leave it” and “wait”. These commands are very useful in many other situations. Use a kong or any other treat dispensing toy so that they have to exert energy and use their teeth to get at the food. Feeding doesn’t always have to be from a bowl, it just needs to be from you.

Don’t over do it! The pleading gaze of an irresistible little Puppy is heart melting. This is no accident. During the canines long partnership with man, they have perfected cunning methods of exploiting man kinds association of food with affection. In prehistoric times semi-domesticated canines first cultivated human beings as a food provider. As the two species grew closer, dogs modified begging behaviors to maximize results: The more pathetic a dog seemed, the more scraps were tossed his way. But don’t be fooled: Begging is not an emotional crisis or a test of your love. It’s what scientists might call an evolutionary survival strategy, or what the rest of us might call a scam.

Allowing your pup to guilt you into overfeeding him, or serving him a steady diet of table scraps in a misguided show of affection, can have harmful or even fatal results. There are growth-and-weight charts available in print and online. Weigh the puppy weekly and record his progress, comparing him to breed-appropriate weight charts. Adjust his food intake to achieve an average rate of growth.

Weighing a dog, even a squirming puppy, is easy. Just weigh yourself, then weigh yourself holding the puppy. Subtract the difference—that’s the puppy’s weight. Voila! Don’t worry about an ounce or two either way; no two dogs, even within breeds, are built exactly alike. A young dog carrying too much weight has an increased risk of orthopedic problems, due to stress on immature joints. Obesity can also lead to diabetes, diseases of the heart and other organs, and general lethargy.

Feeding your pup the moment you get home may encourage separation anxiety. Play or grooming is a more positive way to say hello. If you’re worried you have fed too much but still have some training you would like to work on small portions of carrot or apple chunks are healthy low-calorie snacks most dogs love. Fresh water should be available at all times. During the summer months, consider setting up multiple indoor/outdoor water stations. To avoid a buildup of bacteria, wash the water bowl daily.

Keep your schedule and lifestyle as close to the same too! You won’t be able to take puppy out to parks or public areas until all of their inoculations are complete, but you can treat your own home as a practice ground of what you will like your routine to be. There will be a few adjustments of course, you do have a baby under your roof now, but try to stay as close to the same as you can. You want your new family member to fit in.