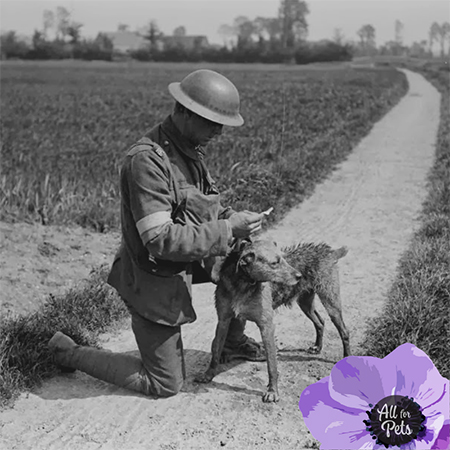 As Remembrance Day approaches, please remember the animals too…

Each year, on November 11th, we take a moment of silence, to remember our fallen soldiers. Since 1921, the traditional red poppy – the Remembrance Day flower, has been worn to show a sign of respect for people lost in military conflict.

Did you know, that there is also a “Purple Poppy” dedicated for the animals that died in the war?

In 2006, the purple poppy was created in New Zealand to remember the animal victims of war. The purple poppy symbolizes all animals who have died during conflict. During human conflicts, animals have been used as messengers, for detection, scouting and rescue, and as beasts of burden on the front line.

It is estimated that more than 8 million animals sacrificed their lives in World War 1 alone. Another important use for animals was companionship, which served as an invaluable and much needed resource in helping soldiers get through each day. In conjunction with the New Zealand War Memorial the National Army Museum hopes to use the 24th of February as an annual Purple Poppy Day, in order for the animals to have a commemorative day.

Let us remember these brave animals, their deeds and their sacrifices.

Hopefully, the ‘purple poppy’ commemoration will become a Canadian tradition one day. Would you honour all the animal victims of war, if you could wear a purple poppy?